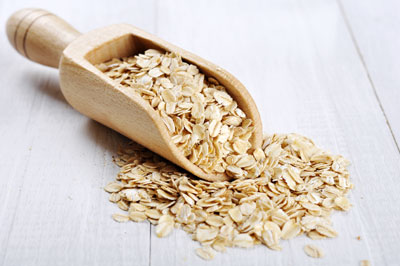 SUPER FOOD OF THE MONTH: Oats

From breakfast to beauty products, oats are outrageously good for you!

What it is: Common oats (Avina sativa) are a species of cereal grain grown for their seeds. Whereas oats are primarily used for human or livestock consumption, oat extract has frequently been used in beauty products and treatments.

Where they’re from: Although it is difficult to pin down where exactly oats originated (there are a variety of species and subspecies), studies show that oats date back as far as 2000BC and were mostly found in the region of the Near East (or Middle East as we know it today).

Where they’re produced: Oats need a cool, moist climate to thrive in. They are generally produced in Europe and North America, with Russia, Canada, the United States, Finland and Poland leading the way.

What they taste and look like: Wild, unprocessed oats have a greyish-fawn colour while their processed counterparts are lighter in colour. There are several different varieties, so the size and shape of oats also differ, such as rolled oats that have been rolled into flat flakes and oat groats which are still whole and grainy (only the inedible hull has been removed). Oats taste differently according to variety and recipes used – from oatmeal which usually tastes soft and creamy to oat bran cookies which have a crunchy, chewy taste.

How to eat/use them: Oats are used in a variety of foods with the most popular being rolled (traditional) oats for oatmeal. It is also a popular choice in baking – from breads and muffins to cookies and oatcakes. Today, oat extract is also extensively used in beauty products as studies have shown them to provide external nourishment to hair and skin.

A good source of: A range of different vitamins and minerals including protein and fibre.

Benefits: Oats are rich in soluble and insoluble fibre, which lowers cholesterol and simultaneously manages blood sugar levels. Need to shed some kilos? Regular consumption of oats has been known to aid weight loss and digestion and, at the same time, lower the risk of heart disease. Also a good source of antioxidants, it can prevent conditions like cancer, diabetes and even possibly Alzheimer’s disease. In addition, oat extract used in beauty products moisturises, cleanse, exfoliates and acts as an anti-inflammatory – working its magic inside and out!

A delicious, easy recipe sure to kick-start your day.

Method
Add all the ingredients to a pot and bring to a boil over a medium heat. Stir rapidly for about five minutes until it becomes smooth. Dish up, add the topping and serve immediately.