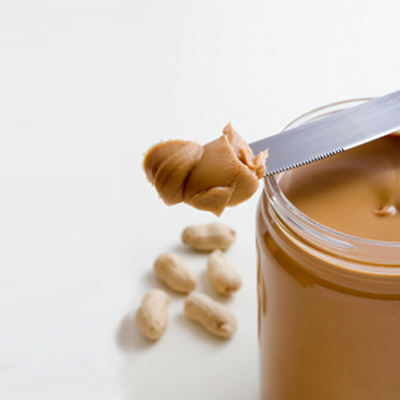 What it is: A food paste made from ground dry roasted peanuts. It takes about 540 peanuts to make a 340g jar of peanut butter.

Where it’s from: Native to America, peanut butter dates back to the Aztec times where the Aztecs roasted peanuts and mashed it into a paste. Peanut butter as we know it today, was first produced in 1884 by Marcellus Gilmore Edson of Montreal, Canada.

Where it’s produced: While peanut butter is very popular in North America, the Netherlands, United Kingdom and parts of Asia, it is mainly produced in America and China.

What it tastes and looks like: Peanut butter has a salty taste and gooey texture with a hint of sweetness to it. There are a number of different varieties to choose from (for instance chunky, smooth and creamy) and they all differ slightly in texture and flavour. The colour of peanut butter also depends on the type – ranging from rich, light brown to dark beige.

How to eat / use it: With so many varieties on the market, peanut butter is not only used as a traditional spread on sandwiches, crackers, celery and the like, but also as an ingredient in many recipes – especially in cookies and candies. Yum!

A good source of: Two tablespoons of peanut butter contain about seven grams of protein and two grams of dietary fibre, while it also helps to supplement your fibre intake from other foods. Peanut butter is loaded with healthy, unsaturated fat and a good source of vitamins and minerals such as Vitamin B, potassium, iron, magnesium, copper and calcium.

Benefits: Contrary to what you may think, peanut butter can aid weight loss! With the combination of fibre and protein that fills you up and keeps you feeling fuller for longer, you will eat less overall. Studies show that consuming peanut butter can lower the risk of developing diabetes and heart disease, while also reducing cholesterol levels and the risk of cancer.

Curl up on the couch with this tasty hot drink! (Courtesy of www.marthastewart.com)

Method
Warm milk and cream in a medium saucepan over a medium-low heat. Add chocolate, and whisk until melted and combined. Continue to warm mixture until it thickens, for about 5 minutes. Whisk in peanut butter until smoothand enjoy.

PrevPreviousCan great skin be created?
NextWhat’s in your anti-ageing product?Next