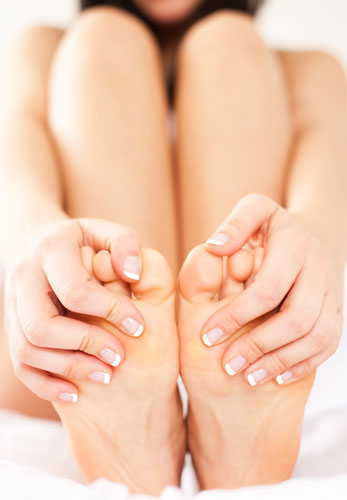 The Huffington Post seem to think foot cosmetic surgery is on the rise in America, and are calling it toe-besity. Seriously? Seriously?!

If you thought women had plenty to nip and tuck before, well then the latest plastic surgery craze should open your eyes to a completely unexplored territory in the world of cosmetic procedures (in our minds, at least): surgery to slim down your toes.

Yep, you read that correctly. Americans’ neurosis have now become so specific as to cause severe embarrassment over the width of their toes, an aptly titled condition known as ‘toe-besity’.

Good Morning America spoke to Dr. Oliver Zong, a New York-based surgeon who performs toe re-shaping procedures, about the new phenomenon:
‘When people first started asking, I said "What?" We were mostly doing toe shortenings in the beginning.’

Not every plastic surgeon is so knife-happy when it comes to toes. Dr. Hillary Brenner, a member of the American Podiatric Medical Association, told the morning talk show: ‘I don’t think it’s ethical unless you’re having pain.’

Not only is the surgery entirely elective, meaning insurance companies won’t cover the cost of the pricey procedure (prices range from the hundreds up to the thousands), but patients take on the same medical gambles as any major surgery, according to Brenner: You’re undergoing risks – there’s the risk of anesthesia, infection, deformity of the toe if the surgery is not done right, a risk of reoccurrence and the risk of surgery in general. It’s trauma to the foot.’

Well that’s enough to deter us. And with Americans spending $10.4 billion on cosmetic surgery in 2011 and teens rushing to get chin implants before the prom, Brenner’s warnings about elective procedures may just come at the most appropriate time.

On the strange wave of women electing for surgery to fit into high heels, Brenner says, ‘Why fix something that’s not broken?’

Preach, sister. What do you think about the rise of all of these specific plastic surgery crazes? Sign in to Beauty Addicts and have your say.

Originally written by Rebecca Adams, this article appeared in the Huffington Post.

Other articles you may be interested in:
How Botox affects your emotions
Beware of fake Botox
Carboxytherapy
Who should be performing beauty procedures
Laser treatment