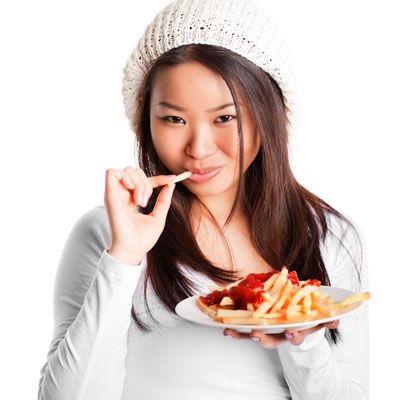 Your eating habits could be negating all that hard work you’re putting in at the gym. FitSugar fills us in on the foods you need to avoid if you’re serious about losing weight.

Even if you’re working out hard at the gym, nutrition is key to continued weight loss and a long life. I’m a big believer in the idea that everything should be in moderation, but if you’re chowing down on any of these foods regularly, it’s time to rethink your habits. Get ready to kiss these five problem foods goodbye and embrace healthy and delicious substitutes

While a vegetarian lifestyle isn’t for everyone, there are real benefits to cutting down on fatty red meat intake. It’s no news that red meat has its risks: it’s been linked to different types of cancer and an overall shorter life span. Research has found that replacing just one red meat dish a day with a healthier protein choice reduces your risk of dying early by 7% to 19%. In terms of weight loss, you can still enjoy red meat, but you’ve got to say goodbye to fatty cuts like hamburger and pork shoulder and go a little leaner.
Better choice: The next time you’re craving for some serious steak try a lean cut of red meat like flank steak, tenderloin or sirloin. You may be surprised to learn that a lean cut of beef has barely more saturated fat than a similar-sized skinless chicken breast.

Hate to say it, but to lose weight, you’re going to have to lose the booze. Besides the empty calories found in alcohol, many cocktails are filled with sugar, which really hinders the ability to take off weight and keep it off – even if you’re closely watching the other things you’re eating.
Better choice: You don’t have to say goodbye to alcohol forever – just make smarter choices! Instead of a blended daiquiri, go for the fresher flavours of a low-cal mojito. And lucky for us, Bloody Marys and mimosas are some of the most guilt-free options out there.

According to research, french fries are the number one food keeping you fat, and chips were the second worst offender. Enjoying a few in moderation is fine as a treat, but they should not have a regular place on your plate if you’re trying to lose weight.
Better choice: Go for a delicious baked potato – but go light on all the fixings. It’s an amazing source of protein and fiber. It will also fill you up for far longer than its fried counterpart.

Soda offers literally no nutritional benefits. I often hear people say that they only drink diet cola, but diet soda has health risks, too, including an increased risk of heart attack, weight gain and stroke. Continuing to drink this beverage is sabotaging your weight loss goals. Studies have shown that individuals who drink two diet sodas a day or more had waistlines that were 500% larger than the nondrinkers.
Better choice: If you just love the effervescence of carbonated soda, choose sparkling water with a squeeze of fresh citrus.

In the HBO documentary The Weight of the Nation, American’s got a wake-up call from Robert Lustig, a pediatrician at UCSF Benioff Children’s Hospital. He explained that ‘juice is just like soda… there is no difference’. Squeezing all that tasty juice out of the fruit may be completely delicious, but you’re losing the fiber of the fruit when you do this.
Better choice: Snack on a piece of fresh fruit! You’ll get the flavour you love with all of the healthy benefits – and none of the added sugar.

Written by Lizzie Fuhr, this article originally appeared on FitSugar.