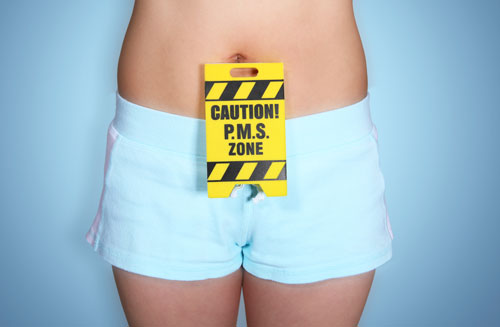 There’s the cramps. There’s the emotional incontinence. There’s the chocolate cravings (if you’re anything like me). Society is rather fond of implying that women mutate into irrational, hormonal beasts whenever their ‘lady time’ approaches, but you’d also be tetchy if your womb felt as though it had been impregnated by an alien, and the foetus was now trying to eat its way out of your abdomen. You think that’s melodramatic? I’LL SHOW YOU MELODRAMATIC! Ahem. Suffice to say, the cramps can be rather unpleasant.

An estimated three out of every four menstruating women experience some form of premenstrual syndrome – mood swings, tender breasts, acne, bloating, food cravings, fatigue, irritability and depression – though the symptoms tend to peak in our twenties and thirties. A small percentage of women suffer from something rather unpleasant-sounding called premenstrual dysphoric disorder (PMDD), a severe form of PMS. Although scientists still don’t understand the precise biological mechanism behind PMDD, researchers at the Rockefeller University in New York reported the results of a study on mice that suggested a particular gene may be involved. So it could be genetic. If you felt your body was betraying you before, there could soon be proof.

The causes of PMS are a little blurry, but it’s generally agreed that several factors may contribute to the condition:
• Cyclic changes in hormones. Signs and symptoms of PMS change with hormonal fluctuations and disappear with pregnancy and menopause.
• Fluctuations of serotonin, a brain chemical (neurotransmitter) that is thought to play a crucial role in mood states, could trigger PMS symptoms. Insufficient amounts of serotonin may contribute to premenstrual depression, as well as to fatigue, food cravings and sleep problems.
• Depression. Some women with severe PMS have undiagnosed depression, though depression alone does not cause all of the symptoms.
• Stress. It can aggravate symptoms.
• Bad eating habits. Some PMS symptoms have been linked to low levels of vitamins and minerals.

It’s enough to make you see red. (Yes, I just said that.) Luckily, we live in an Age of Science. Men and women in white lab coats will tell us what to do!
• Get supplement wise: Studies have found that up to 50% of all symptoms can be reduced by getting 1 200 mg of calcium daily through food (green leafy veg, soya and dairy) and supplements;
Taking 600 IU of vitamin E daily may help reduce premenstrual breast tenderness;
Magnesium supplements of 300 to 500mg during the days you experience symptoms may reduce sugar cravings, and help reduce breast tenderness;
Primrose oil is effective for some women – take about 1 500mg per day;
Vitamin B6 helps reduce the symptoms of PMS for some women – try 50 to 300mg daily, but be careful not to overdose, as side effects such as numbness can occur.
• A low-fat, predominantly vegetarian diet can reduce the length and severity of menstrual cramps and other PMS symptoms. Try to eat small, frequent meals, high in complex carbohydrates (wholemeal breads, cereals, brown rice and pasta).
• Get off the couch. Regular exercise is an excellent way to reduce the symptoms of PMS. It also benefits you by reducing your stress levels, lowering your risk of many diseases and helping you to maintain overall good health. Walking, running, swimming, cycling, yoga – all good options.
• Cut down on refined sugar, salt, red meat, alcohol and caffeine – it’ll help to reduce bloating as well as improve your overall health.
• If you suspect you might be suffering form PMDD, consult your GP, who may prescribe antidepressants, birth control pills, nutritional supplements, herbal remedies or diet and lifestyle changes.

In fact, it’s probably best to consult your doctor before making any changes to your daily routine, especially regarding supplements, diet and exercise. Also, make an appointment if your periods are irregular: this could be a sign of anything from polycystic ovaries to excessive stress. (Or it could be nothing – don’t panic!)