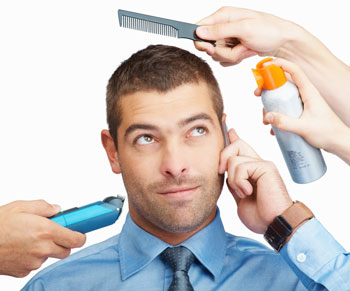 You probably already know that ladies have an eye for details. Men, not so much. Men’s Health magazine polled almost 1,000 women to find out which details men often miss in their daily grooming regimens – and found that most guys are barely skimming the surface. Here are their top offenders and tips on tackling each one.

What you’re missing: You sculpt the front of your mane with the scrutiny of an auditor, but the head hair you can’t see could cost you: Three-fifths of women say wayward fuzz sours desire.
Why she notices: Sloppy neck hair can make you look instantly disheveled, says Michael Moreno, a stylist at Chris Chase Salon in New York City.
Groom to improve: Define your back forty with a 5-minute DIY clip job once a week. Remove the guard on a pair of hair clippers and lift the hair at the base of your hairline with one hand so that the roots of the regular locks are protected by your index finger. Keep the blade head horizontal to your neck and, working from the bottom up, follow your natural hairline. Don’t buzz on faith; check your progress with a hand mirror. Winging it isn’t good enough, says Moreno. ‘You have to see what’s going on back there.’

What you’re missing: A third of women say men don’t care enough about their complexions.
Why she notices: ‘A man’s pores are about 25% bigger than a woman’s,’ says dermatologist Kenneth Beer, M.D. That means bigger blackheads can form on your nose.
Groom to improve: The plug’s black colour isn’t dirt; it’s the oxidative response of the oil in the clogged pore interacting with air. A daily wash is not enough to evict the more subtle squatters. ‘Bar soap won’t cut it,’ says Dr. Beer. ‘Instead, pair a daily salicylic acid-based cleanser to exfoliate the skin with a weekly clay mask to purge impurities.’

What you’re missing: Even mildly stinky breath can be a deal breaker for more than half of women.
Why she notices: You think a Tic Tac will suffice in a pinch, but her nose knows better. Some research has indicated that women can be more sensitive to scents than men are, so they may be more likely to detect even subtle mouth odors – bad news for suitors with less-than-fresh breath.
Groom to improve: Attack the tongue; it’s where many halitosis cases stem from. ‘Most people don’t think about their tongue when they’re taking care of their teeth,’ says Kevin Sands, D.D.S., ‘but it harbors bacteria.’ Brushing your tongue will remove 40% of the offending volatile sulfur compounds, according to Brazilian researchers, but better yet, use a tongue scraper (like GUM Dual Action Tongue Cleaner, $3) and you’ll remove up to 75% of the bad guys.

TEETH: Even out the edges

What you’re missing: Unevenly bleached teeth are a bigger turnoff than an off-white shade that’s uniform across your smile, said women.
Why she notices: Even minor deviations in colour can amplify the contrast between the shades.
Groom to improve: Coverage is key; strips and fixed trays don’t adequately cover your teeth, missing the crevices in between. Choose an at-home whitening kit with custom moldable trays, which will help evenly distribute the bleaching chemicals for consistent coverage.

Other articles you may be interested in:
Male grooming in the 21st century
Manscaping
Shaving and thicker hair growth
Our top six grooming picks for men
Learn how to shave your head

PrevPreviousHow NOT to wear fake eyelashes
NextHow do you choose your lipstick shade?Next